Who is Right on Syria? 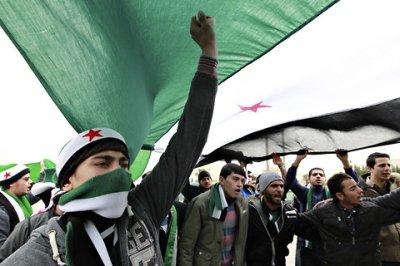 Greetings from dissertation-land. I’ve tried my best to keep my head down over the past few weeks, hence the long spell between posts. Since the comment section is stirring with a discussion about the events in Syria, though, I thought I’d throw a quick post up with some of the most interesting bits and pieces from the news from the past few days.

The NY Times had one of its “Room for Debate” roundtables yesterday, with contributions from Rime Allaf, Sharmine Narwani, Andrew Tabler, Anne-Marie Slaughter, and Ed Husain.

Nick Noe advocates a bargain with the devil, also in the NYT.

A reporter from Al-Akhbar interviews members of the Free Syrian Army in Lebanon.

A very quick note about one of Josh Landis’s points, in the above interview. Josh often says that Syria could turn into another Lebanon or Iraq, and I think he’s right, in the sense that we could see a full-blown sectarian war there, depending on which outside powers get involved.

However, I don’t agree with his larger historical reading of why Lebanon and Iraq had sectarian civil wars in the first place. He finds the origins of those civil conflicts in the colonialist legacy. Broadly speaking, the Europeans came along and created these states that are not really states, and put certain sectarian minorities in charge of them. And the wars that eventually came about were the product of the masses revolting against those minoritarian elites.

That model fits Iraq better than it does Lebanon, whose civil war was the product of many different forces. Yes, there was a movement against Christian political superiority, but it was just one of the many factors that created and prolonged the conflict. Let’s not forget about the roles played by the Israelis, the PLO, the Syrians, Saudis, Americans, and others.

This may sound like hair-splitting, but I think it’s important to choose our words carefully when we talk about the prospects of sectarian violence, and how to avoid it. If Syria resembles either of these nightmare scenarios, it would be Saddam’s Iraq, not pre-civil war Lebanon. The preponderance of power held by the state, the large and relatively powerful army facing ragtag (but gradually more organized  and foreign-funded) militias, the legacy of authoritarianism, the Baath party, etc… these are all commonalities shared by Assad’s Syria and Saddam’s Iraq, not 1970s Lebanon.

Lebanon, past and present, is a cautionary tale in many respects. But not, I would argue, for the current situation in Syria.

« Lebanon, By the Numbers
Joshua Landis and Nadim Shehadi on Syria »