Report on Syrian Students in Lebanon 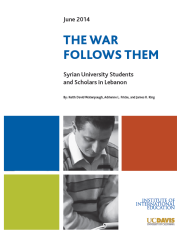 There’s a report out about the situation of Syrian students in Lebanon, authored by a specialist team of researchers affiliated with the University of California at Davis, the Carnegie Corporation, and the Institute of International Education. I know a couple of the authors very well and vouch strongly for their knowledge of the region’s politics, societies, and languages. This is a terribly sad situation, and one worries about the long-term consequences of having such a large and under-served refugee population in a country as small and overburdened (infrastructurally, economically, psychically) as Lebanon.

Among the key findings worth noting are the following points:

« Translating Disney’s Frozen into Arabic
Of FreeCell and Phone Chargers: A Lebanese Parable »

2 thoughts on “Report on Syrian Students in Lebanon”