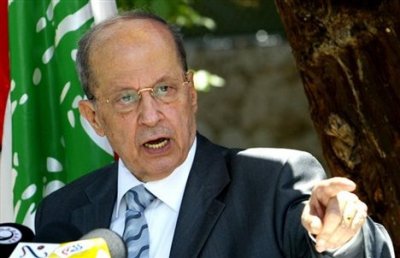 Marcel Ghanem interviewed Michel Aoun last night on his popular talk show, Kalam al-Nas. The general was his regular fiery self, but plain were the signs of campaign fatigue: bags under the eyes, thinning hair, and a sallow complexion.

Marcel, meanwhile, was  in rare form, tugging at every loose thread and goading the FPM chief into one overblown pronouncement after another. Gone was the commanding presence of the would-be Bonaparte of Baabda, who once wiped the Cheshire Cat grin off Marcel’s face (if only for a nanosecond, alas) with his famous warning: rou2 3a sabri. Indeed, Aoun seemed a shadow of his former self. Even as he tried to convey a sense of optimism regarding his standing among Lebanon’s Christians, the look in his eyes seemed to suggest a slightly more desperate sentiment: “Pourvu que ça dure!”

The General probably needn’t worry, however, because his Christian opponents are feckless and divided, and because he himself has donned the mantle of a sectarian za’im as though it were an old bathrobe. The topics under discussion last night? Let’s see… Christians, Achrafieh, Christians, Syria, Hizbullah, Hariri Inc., and Christians. The Pope of the East confirmed once again that he is just as willing to dabble in sectarian scaremongering, as he hinted darkly at the Saracenic threat lurking in the next municipal elections. And while I take comfort in the fact that there are people on both sides of the political divide who as disturbed by this posture as I am (see two recent editorials by the Daily Star’s Michael Young and al-Akhbar editor Khaled Saghieh), ultimately, it seems that complaining about sectarianism in Lebanon is even more naive than not taking advantage of it.

5 thoughts on “Aoun on Kalam al-Nas”