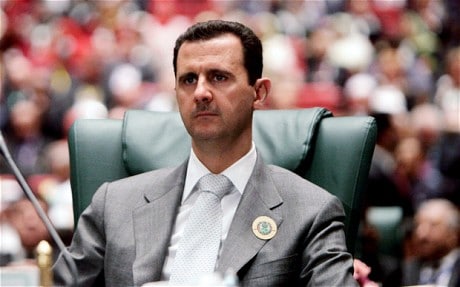 A veteran journalist, Roy Gutman, has written a series of three articles for the Daily Beast with the suggestive titles, “Assad Henchman: Here’s How We Built ISIS” (part 1); “How Assad Staged Alqaeda Bombings” (part 2); and “How ISIS returned to Syria” (part 3).

The gist of the series is that the Assad regime was complicit in the creation of ISIS by allowing Islamists out of prison early during the uprisings; by not engaging them militarily during the war; by staging false-flag operations against government targets in order to justify military crackdowns; and various other strategies.

Gutman’s articles have been championed by opposition supporters and critiqued by regime loyalists. Here are a few thoughts and suggestions for further reading.

The most astute observers of the conflict have long recognized the alignment of certain interests between the regime and the most radical elements in the Islamist opposition. The rise of ISIS and Jabhat al-Nusra has been disastrous for the secular political opposition, whom Assad was intent to portray as foreign-sponsored conspirators from the earliest period. (See here and here for two takes on the major speech of April 2011, in which the regime’s unwavering policy was first articulated.)

But those same astute observers, like the excellent Aymenn Jawad al-Tamimi, have also pointed out that an alignment of interests is not evidence of direct collaboration. Al-Tamimi wrote in 2014:

There is no doubt that the jihadi presence in Syria- whether in the form of ISIS, Jabhat al-Nusra, or the multiple muhajireen-led battalions- is useful to the Assad’s narrative on the rebellion as a foreign-backed “takfiri/Wahhabi” conspiracy against Syria. It is also clear that the regime has tried to exploit this presence to compel the opposition-in-exile at the Geneva talks into accepting that Assad should stay in power, and that the regime and opposition should instead work together to crush ISIS et al.- an opportunity that Assad hopes could quell the entire rebellion and reassert control over the whole country, which has been and remains his goal.

There is also no doubt that ISIS and Jabhat al-Nusra have regime infiltrators. One should note an interview back in the summer with one Abdullah Abu Mus’ab al-Suri, an assistant to ISIS’ northern amir Omar ash-Shishani, in which he affirmed: “Indeed the [Islamic] state has become greatly infiltrated by the Syrian regime; and that has led to harm to the reputation of the state and shaking of its security.”

However, infiltration is hardly a surprise, and does not show a group is a regime agent. Infiltration amongst both the opposition and regime sides is only to be expected in a time of war, as when the predecessor of Jaysh al-Islam- Liwa al-Islam- was able to infiltrate regime ranks and perpetrate the suicide attack in summer 2012 that killed the Defense Minister. On the other side, former regime officers- leaving aside what their real loyalties might be- can be found across the rebel spectrum.

What to make, then, of Mr. Gutman’s articles? Insofar as they are based on interviews with defectors and the statements of foreign political officials who are party to the conflict, the articles are short on data and long on speculation. That’s unfortunate, because they have given regime apologists more ammunition for the claim that the Syrian uprising is nothing but a foreign conspiracy fueled by fake news and Gulf-funded think tanks.

When the Assad regime released many of its Islamist prisoners from Sednaya Prison in 2011 — including individuals like Zahran Alloush, Yahia al-Hamawi, Hassan Abboud, and others who would go on to positions of leadership in Ahrar al-Sham, Jaysh al-Islam, and ISIS — it did so in full knowledge that the Islamists spelled trouble for the nascent uprising.

The intelligence services guessed correctly that the peaceful secular demonstrations would be overrun by violent former inmates, but they also thought that the Islamists could be squashed by the Syrian Army and the uprisings would come to an end. A few concessions would be offered to an authorized political opposition. The Syrian public would be spooked by the specter of jihadism and would line up behind the regime again. Everything would return to normal.

This was the gamble, and it had worked in the past. Using Islamists to start fires that the regime would put out was not a novel strategy; it was an old game that Arab governments had played successfully for decades. Just a few years before the 2011 uprisings, we saw the rise of a jihadi movement in Lebanon: Fatah al-Islam’s short-lived emirate in the Nahr al-Barid refugee camp. That group was widely seen as a tool of Syrian intelligence, used to throw the country into chaos in response to the UN Special Tribunal for Lebanon.

Longtime Syria-watchers will recall that Hizbullah was adamantly opposed to the Lebanese Army’s assault on the camp, despite the fact that Fatah al-Islam was a Sunni salafist jihadi group that didn’t look so different from Jabhat al-Nusra today. The only reasonable explanation for Hizbullah’s opposition was that the party’s leadership knew that the jihadis were under the sway of Syrian intelligence.

So, using jihadi groups to further one’s political ends is not far-fetched, as a principle. It would have been a logical thing to do under the circumstances, given the regime’s successful infiltration of these groups (as Ali Mamluk admitted to US government representatives in a famous Wikileaks cable).

The gamble, though, was only partly successful. The uprising was quickly corrupted, but the jihadists would soon shock not just the regime but the rest of the world by rampaging all around the Levant and Mesopotamia.

By this point, there was no longer any meaningful connection between the regime and its jihadist foes. There was still an alignment of interests: Assad could claim, justifiably, that the opposition was dominated by the jihadists, and that the only way to deal with it was through military confrontation. But at what cost?

Some will say that the opposition would have been corrupted by jihadism whether or not the regime released those prisoners. They might be right; the conflict may well have been internationalized anyway. But if we’re going to play that game of scapegoat historiography, there’s enough blame to go around.

This is my personal speculation, which, as always, is open to critique. If you disagree with me, see how my friend Ehsani’s reading strikes you. And be sure not to miss this interesting radio interview with Roy Gutman and Joshua Landis.

« Aoun and the Future
On Reza Aslan’s “Believer” »

15 thoughts on “Assad and ISIS”