Does Hizbullah Want to Lose the Election?

[Updated] See below for an extended analysis by Joshua Landis posted in the comment section of the last post. 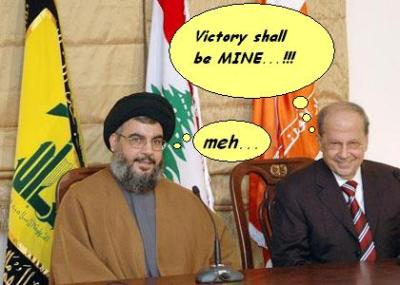 Angry Arab has this report on his blog:

“I can report this: many in the Lebanese opposition are grumbling about Hizbullah and its stance in the upcoming parliamentary election. There is a suspicion (among the allies of Hizbullah, or some of them) that a strong trend in Hizbullah calls for…losing the election. Apparently, some in Hizbullah don’t want to win the election. (There is some evidence of that in the last speech by Hasan Nasrallah in which he said that it is not a big deal if the opposition loses the election). The logic is that Hizbullah feels that winning is too burdensome: that economically, the Hariri family has left a mess with a massive public debt, and politically, Lebanon may be forced into Arab-Israeli negotiations. Hizbullah does not want to be in a position to be pressured to “deliver” on both counts. Hizbullah argues, according to those allies who talked to me, that it would be better for it to stay in the opposition because they keep their weapons and they can block whatever they don’t like. Hizbullah didn’t interfer in the feud between Murr and `Awn and is giving Birri a room to negotiate with Jumblat, which upsets allies of Hizbullah in the opposition.”

I’d like to add my voice to As`ad’s and say that this is also an impression that I’ve gotten quite a few times over the past couple of months. A few weeks ago, al-Akhbar carried a piece about Nabih Berri’s electoral calculations in the South, and how they might impact Michel Aoun’s winnings (particularly in places like Jezzine), to the tune of five seats. There was also a discussion on the Aounist forum a couple of months back in which various participants were indeed grumbling about the deals that were being cut between AMAL/Hizbullah and the Future Movement/PSP in places like Saida and Beirut 2.

And there was the recent conversation that I had with my friend “Abbas” (the Hizbullah member whose views are much sought after by the Israeli readership on this blog).  I was talking to him about Hizbullah’s relationship with AMAL, particularly vis-a-vis the upcoming election, and this is what he had to say:

QN: “How is Hizbullah’s relationship with Amal these days?”

Abbas: “Our relationship is good enough. We have common interests. We are not going to jeapardize the relationship for the sake of a few seats.”

QN: (Noting that this was not what i asked him) “What do you mean?”

QN: “The two parties have had problems in the past.”

Abbas: “Yes, but that was the result of the Syrian policy in Lebanon. The Syrians would try to play AMAL and Hizbullah off each other. So, when they supported Berri, it was not out of love for Berri, it was out of an effort to weaken the muqawama.”

QN: “So you’d say the March 8 alliance is strong. There are no internal problems?”

Abbas: “We have no interest in making problems. They can go contest the seats all they want. That’s just not our style.”

As AIG suggests in comment #9, Hizbullah and its allies are gaming out the US, Israeli and March 14 response to any attempt to form a government.

US officials are, no doubt, making it plain to both Syria and the March 8 members that they do not want to win elections and should not contemplate doing so.

Even without an LAA,

1. It would mean a cut off of aid to the Lebanese Military.

2. Worse, Group 8 commitments of financial aid would be retracted.

3. The US would have to boycott Hizb cabinet members.

4. Britain has tentatively begun talking to Hizb, perhaps to open the way for acceptance of a March 8 victory at the polls, but many in the US administration have let it be known that they will not be following the British and will fight this gambit to open Western lines of direct communication and eventual peace.

5. France is reiterating at every turn that it believes Doha is working and stands behind it, i.e. France wants the status quo to continue.

6. Syria too has taken a similar line, but insists that whatever the election outcome, there must be a unity government – theoretically this means that Syria wants Hariri to accept to play second fiddle in a Lebanese government led by the opposition, which would make an LAA much harder to push through congress (If Hariri lobbied against it.)

7. Hariri has publicly denounced such a possibility, claiming that he will play no part in an opposition led government. In fact, Hariri has begun denouncing Doha as well, suggesting that he may retract support for a “blocking third” mechanism if his group wins elections.

8. This brings us back to a continuation of Doha, which the French are supporting as the best option to avoid upsetting the Lebanese applecart and keeping any one faction from trying do do an end run around the others or trying to “exploit” elections to gain more power. (Certainly makes a mockery of elections but not of the Lebanese concept of sectarian power sharing.)

9. Syria has refused to name an ambassador to Lebanon and insulted the Lebanese when they opened theirs in Damascus the other day by pretending to get the day wrong. Some unnamed officials claimed that Syria would not name an ambassador until Lebanese politicians are more polite – meaning Geagea and Jumblat. Syria is letting March 14 and the US know that the normalization process between Syria and Lebanon that the French have set out will not go through unless the election process goes smoothly, Doha is respected, and Syria’s and Hizbullah’s opponents do not go back on the war path to try to disenfranchise it or disarm it. In other words, normalization is a two way street.

In conclusion, I suggest that Hizbullah will remain in the opposition but try to make clear that it is doing so out of magnanimity and forbearance. Thus, if Lebanon’s problems get worse, they can be blamed on March 14’s stubbornness and its loyalty to Israel and the West.

If Israel and America can deliver for the Lebanese under these conditions, March 14 will come out the winner and will grow in popularity.

If Lebanon stagnates and popular anger grows at the treatment of the Palestinians, America’s inability to improve conditions in the region, and continued fragmentation and paralysis in Lebanon, then the Lebanese will grow weary of the “Western-Israeli” solution and will swing further toward the opposition.

33 thoughts on “Does Hizbullah Want to Lose the Election?”