Should Lebanon Default On Its Debt? 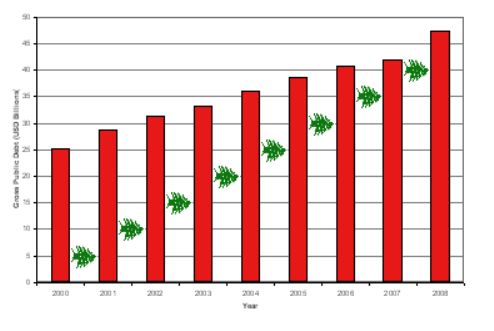 In addition to being responsible for Shakira, the biggest plate of hummus in the world, and Hank the Angry Drunken Dwarf, the Lebanese can be proud of another dubious distinction: their enormous national debt, which is said to be in the neighborhood of $47-52 billion. Measured per capita or as a percentage of GDP, it is one of the highest in the world.

Like everything in Lebanon, the debt issue is highly politicized. There are two prevailing narratives about where it came from and who is responsible:

Most believe that something drastic needs to be done about the debt, regardless of which of the above narratives one subscribes to. Of course, one’s views about the sources of the debt necessarily inflect one’s preferred antidote. Here are some frequently-encountered proposals:

A reader of this blog, Ghassan Karam, has written the following commentary arguing in favor of solution #4, which I publish with his permission. Should stimulate discussion.

To Default or Not To Default…

There comes a point when an ever expanding level of debt and the ability to service it become unsustainable. It is my belief that the state of Lebanon has reached this stage. A Lebanese national debt of over $50 billion and rising is being fueled by a huge annual deficit that is also unsustainable in its own way. The urgency of the situation is put in sharp focus when the debt service of almost $5 billion annually is factored in. That sum is larger than the total of remittances by the Lebanese nationals who are working abroad and it is also greater than the estimated annual earnings from tourism. It must be ironic when all the revenue from the countries’ most vibrant economic sector is essentially wiped out by interest payments on the national debt.

One common indicator of a country’s ability to carry a debt burden is to express the debt service as a percent of its total earnings from exports. By that measure Lebanon already devotes close to half of these earnings to debt service which makes it the fourth such highest proportion in the world. For comparison, Egypt spends 10% Jordan 9% and Tunis 14%. Furthermore, I estimate the Lebanese GDP to reach the $50 billion mark by 2020 and the Lebanese National debt to exceed $75 billion by then. These modest projections imply a debt service requirement of around $7 billion a year which is around 14 % of the GDP. If the Lebanese Government budget is to be around 25% of the GDP then in a decade over half of the Lebanese budget will have to be earmarked to debt service.

The ability of an individual, institution or state to carry on the burden associated with a certain level of indebtedness rests on some rather strict parameters regarding the size of the debt relative to the estimated income in addition to the conditions under which the debt in question has been issued. The relative size of the Lebanese official debt as a percent of GDP is already one of the highest in the world. In addition the fiscal deficit, at over 10% of the GDP, is also one of the highest deficit gaps in the world. Both are judged to be unsustainable. How can they be sustainable when the estimated annual growth in the economy falls short of even meeting the annual interest obligations not to mention the need to finance every year the new fiscal deficit?

Lebanon has no choice but to stop the national hemorrhaging by taking preparatory steps to restructure its government obligations. A good place to start would be the Paris Club that specializes in debt restructuring. The current Lebanese government should not shy away from considering either an outright default or at least a debt moratorium on all its obligations if a major restructuring agreement to wipe out at least 80 % of its current obligations is not arranged.

Such major steps are not to be taken lightly but they are not to be unrealistically feared also. Argentina has defaulted 5 times over the past century or so and each time it regains its economic vigour and access to the international capital markets. The recent unilateral and sudden demand by Dubai World for restructuring most of its debt is another instructive case about the debilitating effects of an unsustainable debt burden and a possible mean for diminishing its severity.

Until such possibilities are studied seriously the Lebanese Finance Ministry must stop in due haste its misguided policies of seeking more risk. Minister Raya Hassan was very proud in announcing the recent ability of the Lebanese state to issue $750 million worth of Eurobonds. These efforts that have gone so far unchallenged both by the press and other government members should cease immediately. External debt adds a new dimension to the problem of Lebanese indebtedness, that of an annual outflow of scarce capital. Very few countries, if any, are in a position to seek proactively to increase the rate at which financial capital is drained from the state.

An equally serious risk, which a rational investor shirks, is the added exposure to foreign exchange risk that comes neatly packaged whenever a portion of the domestic debt is reissued in foreign currency denominations. It must also be emphasized that the Finance Ministry has been less than forthcoming when it boasts of its ability to obtain 5 year paper at 5.87% interest and 7 year paper at 7% interest. Ms. Hassan did not find it convenient to mention that the going market rates for the above maturities are 2.03% and 2.74% respectively. .

In conclusion it is clear that the Lebanese authorities must take meaningful action to reduce the annual fiscal deficit, restructure the hugely unsustainable Lebanese debt before it evolves into a major uncontrollable crisis. They need to embark immediately on a path of reducing the exposure to foreign currency and external ownership.

Update: The Lebanese Ministry of Finance has a substantial number of reports and publications available on its website. Click here for the latest report on the public debt (PDF).

26 thoughts on “Should Lebanon Default On Its Debt?”