Grand Theater: A Tale of Beirut 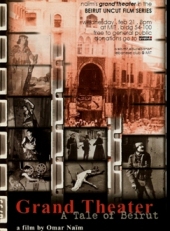 Thirteen years ago, one of my oldest friends, Omar Naim, made a documentary film about Beirut’s Grand Theatre, a landmark building that once hosted the great touring theatrical groups and musical stars of Europe and the Middle East. The film was Omar’s senior project at university, and it went on to win a Best Picture nomination at the 1999 Student Academy Awards.

I composed the score for the film, and when I played it for my grandmother a couple of years later, she told me that her father had worked as a backstage grip in the theater in its heyday, and then later as a projectionist when it was turned into a cinema during the 1950s or 60s.

Apparently, during rehearsals for the production of Rasputin that is mentioned in the film, the great Egyptian actor Youssef Wahby (who played the title role) demanded that a real baby be used in one of his pivotal scenes, rather than the toy prop that he deemed not lifelike enough. According to the story, my great-grandfather stepped forward and offered up his youngest daughter for the role (my great-aunt Fadia), who was only a few months old at the time. Her siblings would always joke that her acting career had begun brilliantly with an appearance opposite Youssef Wahby.

According to the Solidere Annual Report of 2009 (here’s a PDF, see pp. 86-87), the Grand Theatre is to be turned into a boutique hotel within the next few years. This is yet another sad chapter in the history of the building, and a fitting epilogue to the film.

You can now watch Omar’s documentary on YouTube. It’s half an hour long in three parts. I look forward to hearing your thoughts about it.

« The Noe Doctrine
Oil and Water »

51 thoughts on “Grand Theater: A Tale of Beirut”