The Generalissimos of Tripoli’s Streets

(1) The Economist dubbed Qifa Nabki “the leading blog on Lebanese politics.” Sarah Birke mentions several other excellent authorities to follow on Twitter to get your Lebanon news/commentary. Check them out.

(2) QN is five years old! The anniversary came and went quietly a couple months ago, but in view of the Economist’s shout-out, I thought it wouldn’t be inordinately immodest to point out that over the past half-decade, this blog has received over 30,000 comments on 501 posts (i.e. 60 comments per post). The community of lively and informed readers is what has made blogging here most interesting and enjoyable for me. So, umm, thanks. Back to the topic at hand…

The term qāda al-maḥāwir (the “leaders of the axes”) has become an important part of the political lexicon over the past couple of years, used to describe the hard men and power-brokers of local neighborhood militias in Tripoli. I hadn’t heard this term used before 2007 or so, so I asked some folks if they could shed light on its origins. Is it used only to refer to neighborhood bosses in Tripoli? What about Saida? Does it have a sectarian tinge (i.e. is it only used with Sunni militia leaders and powerbrokers)? Is a qa’id miḥwar just a higher-ranking version of a za’im zaroubeh?

As`ad Abu-Khalil had something interesting to say about this issue:

In the [Lebanese Civil] war, we had more centralized leadership of mahawir, so there was more or less one qa’id for each mihwar. The Tripoli battles are more decentralized, or so they want us to believe in order to avoid responsibility. The official version, probably circulated by the Hariri-run Fir` Al-Ma`lumat (Information Branch), is that there is more than one leader and they don’t answer to one authority. I would say it is a self-serving term coined by the Hariri branch of government and their Saudi sponsors.

I don’t know if As`ad is right about the origin of the plural term coming from the Hariri camp, but his description of the decentralized character of the battle in Tripoli makes sense. It’s hard to know whether the situation in the north is a symptom of the general fragmentation of the Sunni community or a reflection of some kind of factional political game between Hariri and Mikati. Certainly Ashraf Rifi’s recent comments about Mikati’s need to solve the problem or resign would lend credence to this theory. 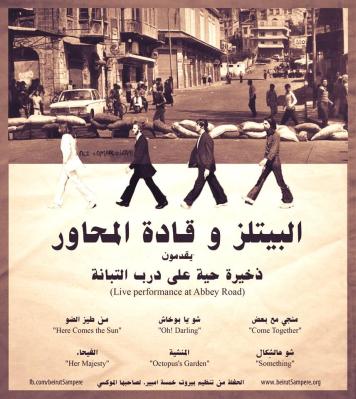 The cynical reading holds that Hariri and the Information Branch are using the Tripoli unrest to pressure Hizbullah, frighten the international community, and make Mikati look bad. Rather than setting up an army of clean-cut, Saudi-funded, American-armed, Jordanian-trained glorified security guards to confront Hizbullah, they might simply co-opt the existing militias that are boiling over with rage about the situation in Syria and Hizbullah’s role there. That’s where the qāda al-maḥāwir come in, but as I said, this is the grossly cynical reading.

If anyone else has light to shed on the question of the term’s origins and inflections, I’d be curious to hear about it in the comment section.

Update: As`ad has clarified to me that the term miḥwar has multiple meanings: “The political meaning refers to an alliance, as the Nazi alliance in WWII was known as “duwal al-miḥwar“. In the military sense, it refers to a particular front in the course of the war. As in miḥwar Bab at-Tabbani or Sha`rani, etc.”

Update 2: Check out the great poster I just added above, courtesy of beirut5ampere.org (h/t @MahmoudRamey).

13 thoughts on “The Generalissimos of Tripoli’s Streets”