New Metaphors for the Syrian-US Rapprochement 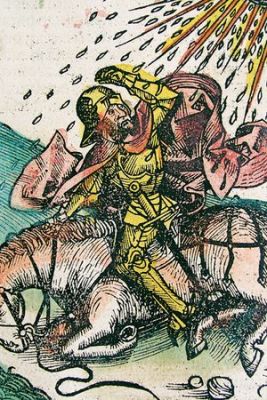 Have you heard? The United States is on… The Road to Damascus.

Yes, that road; the road on which Paul – the synagogue-purging firebrand who set out to disabuse any soft-headed Jews of their Jesus-loving ways – saw the light and embraced the new faith. It’s the spiritual road of inner renewal, the road of understanding and truth, the road of epiphany and wisdom. And just as Paul was, so has U.S. policy towards Syria been reborn. (Do you get it? The parallels are mind-blowing.)

So mind-blowing, it seems, that it’s evidently impossible to write an article about the Syrian-U.S. rapprochement these days without using the phrase “road to Damascus” in the title. Here’s a sampling just from the past two weeks.

See, the nice thing about this metaphor is that it is flexible. If Obama’s gambit fails, count on a plethora of articles with cheeky titles like “Gridlock!”, or “Detour…” or “Ten Car Pileup On the Road to Damascus.” If he succeeds, on the other hand, you’ll see things like “Scenic Road to Damascus Turns into Superhighway,” etc.

But sooner or later, news editors are going to start scratching their heads and looking for some other pithy phrases to replace this chestnut. That’s where Qifa Nabki comes in! I’ve pulled out my concordance and come up with a list of other Biblical verses that mention Syria or Damascus. I’ve also  grouped them into categories based on different editorial lines, for your convenience. Just sprinkle one of these fellows above your by-line, and presto! Instant Biblically-flavored erudition…

“Then David put garrisons in Syria of Damascus; and the Syrians became servants to David, and brought tribute.” (2 Samuel 8:6)

“The burden of Damascus: “Behold, Damascus is taken away from being a city, and it will be a ruinous heap.” (Isaiah 17:1)

“Damascus has grown feeble, she turns herself to flee, and trembling has seized on her: anguish and sorrows have taken hold of her, as of a woman in travail.” (Jeremiah 49:24)

“The servants of the king of Syria said to him, “Their god is a god of the hills; therefore they were stronger than we. But let us fight against them in the plain, and surely we shall be stronger than they.” (1 Kings 20:23)

“The king of Israel asked his staff, “You know that Ramoth in Gilead belongs to us, and we are doing nothing to take it back from the king of Syria?” (1 Kings 22:3)

“He prepared great feast for them. When they had eaten and drunk, he sent them away, and they went to their master. The bands of Syria stopped raiding the land of Israel.” (2 Kings 6:23)

“The report about him went out into all Syria. They brought to him all who were sick, afflicted with various diseases and torments, possessed with demons, epileptics, and paralytics; and he healed them.” (Matthew 4:24)

« Who Will Win Lebanon’s Elections? (Part I)
Can Lebanon Play a Role in Syrian-Israeli Talks? »

7 thoughts on “New Metaphors for the Syrian-US Rapprochement”