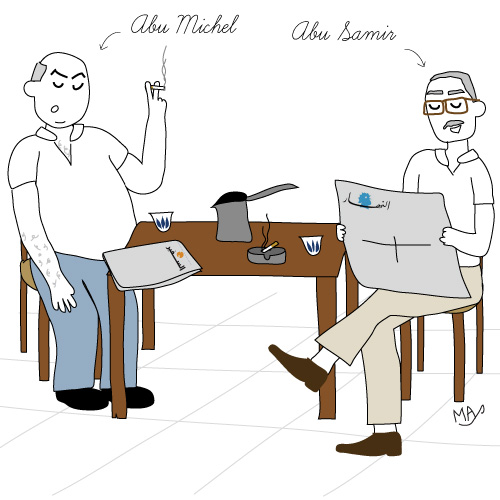 (The scene: A Beirut cafe)

Abu Michel: Did you hear that they’re trying to lower the voting age to 18?

Abu Samir: Of course. What a ridiculous idea.

Abu Michel: What do 18 year-olds know about anything?

Abu Michel: And the 18 year-olds these days? They’re even more immature, with their video games and their internets.

Abu Samir: Well, I’m glad that Hakim has been very clear on this point. He will not accept lowering the voting age unless they also allow Lebanese emigrants abroad to vote absentee.

Abu Michel: What do you mean “Hakim has been very clear”? El-General has been even clearer!

Abu Samir: So we see eye-to-eye…

Abu Samir: I have soooo many relatives living outside Lebanon. If they could vote, the entire picture would change.

Abu Michel: I have so many as well. Dozens!

Abu Samir: Fourteen million! That’s the number of Lebanese living in the diaspora.

Abu Michel: I heard it was more like twenty million!

Abu Samir: Whatever the number is, it’s a lot ya zalameh. And they’re mostly Christian. Why do you think the Berris and Hariris and Jumblatts don’t want to let them vote?

Abu Michel: (smiling) Naturally. And I’m sure that Mr. Slim would love to vote in the municipal elections here in Lebanon. But noooooo, what do Berri and Hariri say?

Abu Samir: (sarcastic voice) “He’s been away too long… he’s never been to Lebanon… his father left when he was 14… he doesn’t even speak Arabic…” Give me a break! Once a Lebanese, always a Lebanese!

Abu Michel: Exactly! He has a right to vote in his ancestral municipality, even if he’s never stepped foot in it!

Abu Samir: Hell, I’ve never even been to my municipality either! We were registered erroneously in Akkar two generations ago and we’ve never been able to change it!

Abu Michel: Me too! I’ve never been to West Bekaa, but do you think that’s going to prevent me from impacting the lives of the poor schmucks who do live out there?

Abu Samir: And that hot chick who plays the Czech student in American Pie!

Abu Michel: You see? There are so many expatriate Christians… I mean, umm, Lebanese… who should not be deprived of their right to vote.

Abu Samir: I couldn’t agree more. Plus, if we let them vote in our elections, maybe they’ll finally start taking an interest in Lebanese affairs.

Thanks are due to the talented Maya Zankoul for the illustrations. To see previous collaborations between QN and Maya, click here.