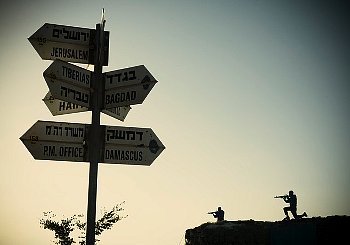 Moving right along in our series of interviews with various experts and friends of the blog, I’m pleased to bring you this conversation with Dr. Joshua Landis, Associate Professor of Middle East Studies at the University of Oklahoma, and author of the widely-read Syrian affairs blog, Syria Comment.

Josh and I sat down over a virtual finjain qahweh to chat about Syrian-U.S. relations and the prospects of a peace deal between Syria and Israel. As always, feel free to leave questions and criticisms in the comment section, and perhaps our guest will respond in person.

QN:  Engaging Syria seems to be a low priority for the current administration. At the same time, President Assad looks content to cultivate his relationships with regional powers like Turkey, Iran, and Saudi Arabia. With little urgency on either side, how likely would you say it is that we will see any substantive change in the U.S.-Syrian relationship over the next few years?

JL: Without peace between Israel and Syria, there will be no real change in the regional security architecture or the relationships that define it.

Israel and America are very close allies. No US administration is going to be good friends with Israel’s main Arab enemy. There are tremendous pressures in Congress and at every level of US society to punish Syria further.

QN: President Bashar al-Assad has publicly stated that he is prepared to sign a peace agreement with Israel, and the two countries have come close to an agreement on at least two occasions in the last ten years. What is preventing a deal from going forward, and how might the obstacles be overcome, in your opinion?

JL: The single most important reason why Israel and Syria have not been able to achieve peace is that Syria is too weak. Israel does not believe it will achieve sufficient security, economic, or diplomatic gains by giving back the Golan. Syria is not a major threat to Israel even with a beefed up Hizbullah and new friend in Turkey. So long as Washington remains resolutely on Israel’s side, preserving Israel’s military edge, sanctioning Syria, and thwarting diplomatic efforts to hinder Israel’s expansion into neighbors’ land, Jerusalem has little incentive to withdraw from the Golan. Only very heavy pressure will convince Israelis to make the difficult decision to repatriate its 20,000 settlers and allow the 100,000 inhabitants of the Golan who were expelled in 1967 to return to their land and homes.

QN: President al-Assad has suggested that he could bring Hizbullah to the negotiation table, if Israel got serious about signing a peace deal with Syria. Some analysts argue, however, that much has changed since 2000, and Syria no longer has the same influence over Hizbullah. What’s your read?

JL: First, this is a silly argument for not making peace with Syria. Second, it is based on a misinterpretation of the nature of the alliance between Iran, Syria, and Hizbullah. The presumption is that since Syria’s withdrawal from Lebanon in 2005, Hizbullah no longer has to fear a Syrian invasion of southern Lebanon and thus may thumb its nose at Syrian interests. But this is to misunderstand the nature of their cooperation, which is not based on coercion. It is based on common purpose and interest. Both Iran and Hizbullah have stated that they understand that Syria’s primary national interest is to get back the Golan. They accept this. That is why in 2000, when an ailing Hafiz al-Assad flew to Geneva to sign a peace agreement, neither Iran nor Hizbullah sought to torpedo the agreement.

Syria, Hizbullah, and Iran have preserved their alliance and amicable relations through major changes over the last three decades. Syria has said that the strategic environment in the region will change with peace. Hizbullah will move in tandem with Syria and reposition itself in Lebanon and the region when Syria signs peace with Israel. That does not mean that Hizbullah will cease to exist or commit suicide. But its priorities will change, as will Syria’s.

It must be remembered that Hizbullah’s arms and missiles come across the border from Syria.There is no other dependable route for them to reach southern Lebanon. Syria, for its part, depends on Lebanon’s Shiite community and Hizbullah for much of its influence within Lebanon. The two will need each other even when peace is signed with Israel. They will not break over that issue. They have not in the past and there is no reason for them to do so in the future.

QN: Do you think war is on the horizon? And if so, will Syria get involved militarily?

JL: I do think that war is on the horizon — not the immediate horizon, but it will come sooner or later so long as the casus belli is not resolved. Syria will not give it up without a fight. It is looking for wars to change the balance of power and to push Israel back on its heels.

During the 2006 war, Israel bombed Lebanon with 7,000 tons of explosives, while the explosives from the approximately 4,000 rockets and missiles Hezbollah fired on Israel added up to “only” 28 tons.

This was a very bad deal from Hizbullah’s point of view, and Nasrallah was quick to apologize to Lebanon and explain that he had neither wanted nor intended war. All the same, both Iran and Syria were shocked and gratified by Hezbollah’s professionalism and fighting prowess. The low-tech missiles worked better than anyone could have expected.

In short, the 2006 war was inconclusive enough to provide Syria, Iran and Hizbullah with a strategy for the future — lots of improved, mobile and smallish missiles spread out over a greater expanse, including Syria. Assad has made it very clear that if Israel doesn’t chose peace by returning the Golan, Syria will remain committed to war and keep stocking up on and improving its missiles and air defense systems.

Syria will try to stay out of any war, as it has in the past. But President Assad understands that he must be willing to go all the way in order reassure his allies and push the Israelis to reconsider their assessment that Syria is too weak and incapable. If Hezbollah’s powers and war plan are to be enhanced, it must have the strategic depth that only Syria can provide. This means greater Syrian involvement and risk. Syria has little choice but to assume greater risk.

Damascus figures that its only hope of getting back the Golan is to force Israel to reassess its security calculations. Hopefully, this will happen without another war, but momentum in the region does not seem to be on the side of the peacemakers.

Syrians say that Israel got a small taste of this possibility in 2006. Israelis counter by pointing to Gaza and claiming that in the next round all of Lebanon will be returned to the Dark Ages and the Assad regime will be terminated.

This may all be posturing but I don’t think so. If there is one thing Syrians agree on, it is that the Golan is theirs. They have grown in confidence since 2006 and are convinced more than ever that what was lost in war, can only be regained by war. Likewise, Israelis have become more militant and righteous. They are increasingly convinced that only military solutions can provide them with results that they want and deserve. All of this suggests that war lies in the future.

« How To Prevent the Next Israel-Lebanon War: A Conversation with Nicholas Noe
A Review of Michael Young’s New Book »

107 thoughts on “Syrian-Israeli Peace: A Conversation With Joshua Landis”