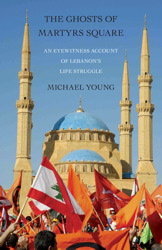 I’ve written a review of Michael Young’s new book for The Nation. An excerpt is pasted below with a link to the rest of the review.

A Forest of Fathers

One weekend during the spring of 2008, I found myself in a discussion with a friend about Lebanon’s latest political crisis. In Beirut the office of the Lebanese prime minister was being besieged by a sprawling tent city of protesters led by the country’s opposition, demanding the resignation of the premier and his cabinet. The business of government had long since ground to a halt, as had all commercial activity around Martyrs Square, not far from where the protesters were gathered; and multiple efforts to reach a compromise between the opposition and the “March 14” loyalists, a coalition of Sunni, Christian and Druse parties backed by the Bush administration and its European and Arab allies, had ended in failure. Pundits warned daily of a descent into the abyss of sectarian violence and civil war.

Like many Lebanese, I found this state of affairs to be both maddening and deeply ironic. Three years earlier, Martyrs Square had been the scene of what was heralded around the world as Lebanon’s rebirth, a popular uprising 1 million strong demanding the end of Syria’s military occupation of the country. This uprising—dubbed the Cedar Revolution—was triggered by the assassination of a billionaire former prime minister, Rafik Hariri, the architect of Lebanon’s postwar recovery. Syria was widely blamed for the assassination, and the ensuing protests—unprecedented in size and in their brazen defiance of Damascus—coupled with intense international pressure, succeeded in forcing the withdrawal of Syrian forces from Lebanon. While no one could have imagined that Lebanon’s endemic divisiveness was now a thing of the past and that a strong democratic state would emerge spontaneously from the ashes of Syrian tutelage, there was a palpable hope, naïve in retrospect, that the Lebanese could finally take their first step toward building such a state.

Nothing so optimistic had come to pass. In the three years since the withdrawal of Syrian troops, the country had been racked by a series of high-profile assassinations and a devastating war with Israel. An international tribunal established to investigate the murder of Hariri seemed to have stalled, and street violence was mounting between youths allied with opposing factions. Most significant, the country had no president. The previous one, Émile Lahoud, a pillar of the pro-Syrian regime, had resigned four months earlier, and the polarized government could not reach agreement over a successor.

All of this I related to my friend—a Syrian expatriate living in New York City—expressing my amazement at how Lebanon had turned into a farce, its political system so broken that it could not even carry out the most elemental of democratic processes: voting a person into office. Amused by my frustration, he suggested that far more remarkable than Lebanon’s paralysis was that the Lebanese state had survived without a president for more than 100 days, with no attempted coups, military takeovers or invasions. Imagine such a thing anywhere else in the Middle East: a power vacuum at the highest levels of government “lasting five minutes, let alone four months.” The laws of political gravity, he mused, do not apply in Beirut as they do in other Arab capitals. What’s more, they never have.

65 thoughts on “A Review of Michael Young’s New Book”