The Death of Arabic is Greatly Exaggerated 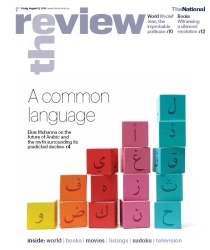 Oops. Got a little carried away there.

In case some of you are feeling a little bit overloaded on Lebanese politics (in which case, your QN membership is hereby revoked), take a look at my cover story about the future of Arabic in this week’s Review, of which I’ve pasted a few paragraphs below.

The Words on the Street

By Elias Muhanna — The National

In the late 13th century, a North African judge and chancery official named Ibn Manzur, who served in the imperial administration of the Mamluk sultanate, was putting the finishing touches to the greatest Arabic dictionary ever compiled. Spanning 20 volumes, Lisan al-Arab (The Arab Tongue) represented the pinnacle of a centuries-old lexicographical tradition, and would not be surpassed in size and scope by another dictionary for 500 years.

Ibn Manzur was driven by a belief that Arabic’s position as the ultimate language of social prestige, literary eloquence, and religious knowledge was under threat. “In our time, speaking Arabic is regarded as a vice,” he wrote in his preface. “I have composed the present work in an age in which men take pride in [using] a language other than Arabic, and I have built it like Noah built the ark, enduring the sarcasm of his own people.”

If Arabs living at Ibn Manzur’s time didn’t speak Arabic, then what language did they use? The Mamluk territories of Egypt and Syria lay at a continental crossroads attracting immigrants and invaders from around the world, but this did not change the basic reality that Arabic remained the lingua franca of a vast area stretching from the Iberian peninsula to the Indian subcontinent. A preeminent vehicle of culture, the language was studied in places as far afield as medieval Europe, where scholars sought access to the scientific and philosophical patrimony of Ancient Greece through the intermediary of Arabic commentaries.

Update: Here are some responses to the piece from The Economist‘s language blog, Michael Collins Dunn, and M. Lynx Qualey’s ArabLit blog.

47 thoughts on “The Death of Arabic is Greatly Exaggerated”