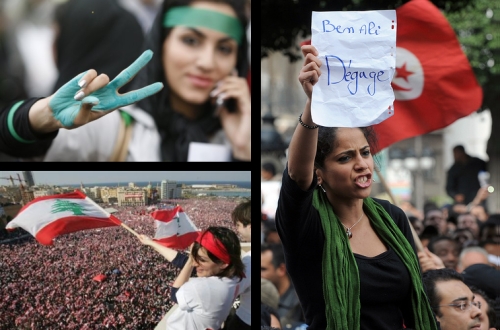 The developments in Lebanon are little more than a distraction compared to the amazing events that have unfolded in Tunisia over the past couple of days. Demonstrating protesters! Police brutality! Collapsing governments! Fleeing autocrats! Thrilling stuff…

Now that the Western media has finally sat up to take notice of what’s been happening in Tunisia, several debates are developing in tandem. What will happen next? Was this the first Twitter revolution? The first Wikileaks revolution? Is the role of social media being overstated? Is social media actually harming the protesters’ chances of success? If you’re interested in following these stories, be sure to check in regularly with Foriegn Policy‘s Mideast Channel, and tune your Twitter feed to #Tunisia.

One thing I’ve found a little bit puzzling about some of the commentary on the “Jasmine Revolution” is the emphasis on the fact that the ousted dictator, Zine El-Abidine Ben Ali, was an ally of the West. This is obviously true, but it’s not clear to me what this has to do with the protests themselves. Have we seen people marching in the streets of Tunis with signs denouncing America? Not really: the main target has generally been Ben Ali and his successor. And yet, the fact of Ben Ali’s ties to the U.S. is increasingly raised as a token of the “authenticity” of this particular Middle Eastern revolt, in distinction to certain other popular movements such as Lebanon and Iran in 2005 and 2009, respectively.

Let me put it another way. Let’s imagine that Tunisia’s revolution succeeds, ushering in a democratically-elected government. While tackling problems of unemployment and corruption, this government also establishes strong relations with America and Europe. Does anyone believe that these relations will push people out into the streets again to demonstrate against their government? Seems unlikely.

Why, then, is civic action in the Tunisian case more authentic to some people than the derisively-labeled “Gucci Revolution” in Lebanon, or the abortive Green Revolution in Iran that so many commentators dismissed as insignificant and over-hyped? Why does one get the sense that those who call for drastic political change in Egypt, for example, would prefer to tweet about the weather if such change came to Damascus or Tehran?

Similarly, doesn’t it diminish the significance of what is happening in Tunisia to compare it to the current Lebanese standoff, as my friend Nick Noe did today? (Nick, If you’d let people comment on your blog, I wouldn’t have to do it here!) He argues:

Having just come out of a meeting with Hizbullah officials, there is little doubt in my mind that the SMART play would be for Sayyid Nasrallah to endorse the Tunisian “process” NOW – to name it, embrace it etc (JASMINE REVOLUTION? The same mistake as Bush’s Cedar Rev? I wonder here strategically?) AS BREAKING THE sectarian attempts (which happened often in Tunisia) to split the Resistance Axis from the Sunni “street.” I am not sure Hizbullah has the courage to do this right now…. especially given the domestic choices it now faces as a result of its decisions over the past few days. Publicly highlighting the toppling, linking it to the toppling project in Lebanon and CALLING FOR A TRIBUNAL FOR THE SUNNI LEADER in Tunisia….. who has the blood of tens of thousands on his hands unlike the Hariri murder…

Come on. Hizbullah’s walk-out is a “toppling project” akin to the Sidi Bouzid protests? Can one really imagine Lebanon’s Sunnis buying into that argument? To my mind, equating Hizbullah’s resignation from Hariri’s cabinet to the Sidi Bouzid revolt is not only a stretch: it cheapens the significance of the latter.

What we are witnessing in Tunisia today is a monumental event, despite the fact that it has almost nothing to do with the West. And like it or not, the March 14 protests in 2005 along with the Iranian Green movement were similarly monumental, despite the fact that the West was obsessed with them. I feel that a little bit more intellectual honesty is needed on these issues.

35 thoughts on “Are All (Middle Eastern) Revolutions Created Equal?”