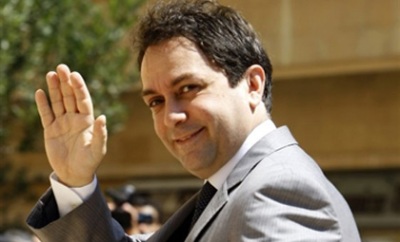 I've been wanting to do this for a long time...

There are many conflicting accounts of what actually took place (see here for a translated round-up of the Arabic press’s lead stories) but the basic chronology seems to be as follows:

I’ve been in touch with government officials and other political insiders since yesterday evening, trying to piece together the factors that led to this showdown and to assess the fallout. Here are some preliminary observations:

The first questions that spring to mind, of course, are: (1) what was this mysterious equipment that Nahhas was prevented from accessing? (2) on whose authority did Rifi cordon off the building and ignore Baroud’s orders? On these issues, al-Akhbar provides some help background. It seems that the telecommunications equipment was a gift from the Chinese government in 2007. The Saniora government licensed Ogero (the state-owned company that is responsible for maintaining the telecommunications infrastructure and which has had a deeply antagonistic relationship with the current Telecoms minister) to set up a third telecommunications network in Lebanon. Why they chose to do so at that time remains unclear, but Rifi claimed to have been operating under the executive order of Saniora’s government when he disregarded the orders of Baroud to allow Nahhas access to the equipment.

It is highly ironic (as Mustapha at Beirut Spring astutely pointed out yesterday) that the ordered dismantling of a telecommunications network should again provide the spark for a tense confrontation between Lebanon’s two political blocs. When the Saniora government attempted to pull the same trick on Hizbullah in 2008, we all recall what happened.

As far as the political fallout is concerned, Nahhas and Michel Aoun look like the clear winners here. Ashraf Rifi has long been accused by March 8 politicians of running the ISF like a March 14th militia accountable only to Saad al-Hariri. Baroud’s resignation makes that reading very attractive to many Lebanese who are uncomfortable with the idea of a military officer ignoring the directives of perhaps the most popular civilian leader in the country (i.e. Baroud).

It should also be pointed out that Baroud (a friend of this blog whom I admire a great deal) has long been unhappy in his position at the Interior Ministry. His freedom of movement has been severely curtailed and he has had virtually no authority over many of the security-related fiefdoms that he is supposed to oversee. He has supposedly come very close to resigning on multiple occasions, but was likely prevented from doing so by President Suleiman, who needed a trustworthy ally in this all-important ministry. Yesterday’s events, however, were too egregious for Baroud to ignore. My personal feeling is that he made the right move.

More info will be posted as it becomes available…

« Nasrallah on Syria: More Equal Than Others?
Lebanon’s Political Honeypot: What’s Behind the Telecoms Spat »