Miqati Clarifies Stance on What Kind of Tumor Hizbullah Is

“Prime Minister Najib Miqati on Sunday confirmed remarks attributed to him by a WikiLeaks document about describing Hizbullah as a “tumor,” but stressed that his words were taken out of context and that he had described the Shiite party as a “non-malignant tumor.”  (Naharnet)

Here follows the transcript of Mr. Miqati’s televised address to the nation, in which he addressed the scandal arising from his comments. 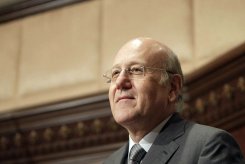 My fellow Lebanese, good evening. I am addressing you tonight to clarify some comments attributed to me by a US official in a confidential diplomatic cable, which was recently released to the public by Wikileaks. I’m not going to deny what I said (unlike certain people who shall remain nameless!) but I would like a chance to explain myself.

In the cable, I was quoted as describing Hizbullah as a “tumor needing removal.” That sounds pretty bad, I admit. It’s not the kind of thing you should call someone behind their back, especially not a dear friend. And I’m really the nicest person in the world — ask anyone — so let me begin by apologizing to Hizbullah from the bottom of my heart.

For what it’s worth, I didn’t mean you were a tumor tumor, like one of those “you’ve-got-six-months-to-live” tumors. I really did mean that you were a non-malignant tumor, and there’s a big difference between the two. You see, non-malignant tumors are totally not a big deal. I personally have no problem with them, whatsoever. They are absolutely fine in my book. Fact, some of my best friends are non-malignant tumors. Ha ha! I kid.

That’s really not very funny so I apologize. Again.

While I’m here, I’d like to apologize in advance for a few other untoward comments I may or may not have made in the past about some of my good friends and colleagues.

For example! I might have said something at one stage about Syria being a “client of Iran.”  Well, obviously what’s missing is the rest of the sentence. I recall saying “Syria is a client of Iran, and a very powerful and important and prestigious client that Iran is very proud to have.” Look at it this way. When I send one of my assistants to have my shoes shined by Abu Tariq, the local neighborhood shoe shine boy, I’m clearly acting as Abu Tariq’s client, right? But who’s more important, wealthy, and powerful? Me, or Abu Tariq? There’s no shame in being a client, nosiree. You get the idea.

Ok, what else? (shuffles some papers) Oh! It may be pointed out, for example, that I might have called General Michel Aoun “a joke and a laughingstock” on one occasion, and perhaps even a “crazy guy,” but I absolutely meant that in the best way, honest to God. If you’ve ever had a few drinks with the General, you’d know that the man is totally hilarious, just crazy. He’s crazy funny, and crazy smart, and just an all-around crazy awesome guy. Would have made a crazy good president. Too bad. Anyway.

I could go on, but I think I’ll just end here by saying that I really do feel awful about any offense taken to my comments. Just awful. Awful awful awful. Next time, I will try to be more discreet.

« The Honey-Tongued Speaker
Who Would Benefit from Proportional Representation in Lebanon’s 2013 Elections? »