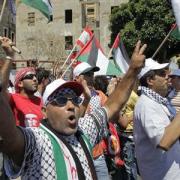 Dr. Nadim Shehadi (bio) has very kindly agreed to answer some questions about the issue of improving the civil rights of Palestinian refugees in Lebanon. This blog hosted two very interesting discussions on this topic a couple of weeks ago, and so I’m grateful to Nadim for agreeing to discuss the policy dimensions of the issue.

Please feel free to leave any additional questions you may have in the comment section.

QN: How likely do you think it is that this Lebanese government will pass some kind of legislation aimed at improving the civil rights of Palestinian refugees?

NS: My view is that the likelihood is quite high, I feel that the debate has evolved a lot in the past four years and that the mood in the country is to discuss things in the open. It is normal for all the skeletons to come out of the cupboards on such a sensitive subject. I think that if a positive outcome is reached it would mean that Lebanon has really recovered from the civil war.

QN: If legislation is passed, what do you think its broad outlines are likely to be (as far as health, social security, labor, and property rights are concerned)?

NS: There are two options. One is that they resolve the issues gradually, one by one (i.e. employment, reciprocity, association law, property etc.) Two is that they do a whole package and resolve all the pending legal issues in one legislative move.

I am in favor of option two because the political cost of each gradual move is the same as for all the bundle together. They must hit it on the head and finish with this problem once and for all. If they do that then it will strengthen the government’s hand in discussing arms and security issues later. But to get to that stage they must also resolve the legal issues unilaterally without linking them to any quid-pro-quo over arms.

The danger with option one is that they would compromise at every stage and use up all the political credit leaving things unresolved. If this happens then the government’s position will be weakened when they come to discussing arms. If they use rights to leverage over arms they will get nowhere.

QN: Walid Jumblatt introduced the emergency laws at a plenary session of Parliament on June 15th, catching many of his allies and adversaries off guard. Why, in your opinion, has this issue come up at this moment in time?

NS: Jumblatt’s democratic gathering made a statement about Palestinian rights in 2005. At the time it was a demand to resolve outstanding issues away from the internal Lebanese political wrangling. This was partly a reaction to President Lahoud repeating over and over again that he wanted to renew his presidency and would never resign because he was there to protect Lebanon from the conspiracy of tawteen or permanent settlement. The issue of tawteen was exploited also by the Syrians who repeated that they were there to protect Lebanon from it.

Then there was the question of appointing Wael Boufaour of the PSP as minister of state for Palestinian Refugees. That mobilised the PSP into organizing a conference in January. After the conference it took them a long time to mobilize and produce the draft that was presented on the 15th of June. They took that long because they lost steam after the appointment of Boufaour did not materialize.

The laws were presented in a normal manner and they would have usually been automatically been sent to the parliamentary committees for discussion. But it seems that Speaker of Parliament Nabih Berri tabulated them for discussion and a vote on that day and this is what took everybody by surprise.

QN: Do you believe that any such legislation is “a step towards naturalization”, as many politicians are claiming, or is this simply a scare tactic?

NS: The problem is that since there is no legal definition of what constitutes ‘naturalization’ or tawteen, potentially any step that facilitates or prepares the ground for permanent settlement could be interpreted as anti-constitutional.

A necessary step to break the deadlock is to agree on a legal definition of tawteen. The SSNP presented a draft law to that effect last week and if it is adopted it would be a very positive move.

In reality, the status of refugees is completely unrelated to naturalization. Their rights are the same whether they live in poverty in a camp or whether they live in luxury and even have acquired another citizenship. A Palestinian in Canada with Canadian nationality can still claim the right of return and compensation, it is theoretically an individual right that is not dependent on status. In any case, whatever the outcome of the negotiations over refugees, no refugee will be forced to do anything they do not want to do. The refugees will be presented with options that are clearly defined and each individual with exercise a choice between the different options. The implementation process will take at least 10-15 years after the agreement has been reached.

QN: Are fears about the impact of such legislation on the economy and on security justified?

This is the only really tangible question and a very important one. The problem is that we do not have proper data or impact analysis related to these legislations. The reason is that the debate so far has been more emotional than rational and touches on all the traumas and phobias that are the legacy of the civil war. This is true both for Palestinians and Lebanese.

It is very important to understand that the laws will not change things radically; this is because Palestinians in Lebanon work in most professions and do not obtain a work permit. The law is not really enforceable. The figures are really misleading too. In one of the speeches today, it was mentioned that there are 136,000 foreigners who were given work permits in 2007 and that only 261 Palestinians were given work permits and that this is discrimination. This is a false and very misleading image, it gives the impression that there are 422,000 Palestinians in Lebanon and that 421,739 of them are being ‘denied’ a work permit, denied is an often used word. The reason there are only 261 work permits is that only 261 were applied for.

In reality what you need in Lebanon is a residence permit and to obtain it you need to have a work permit. So if you are a resident already, like Palestinian refugees are, and do not need a resident permit then you do not need to bother getting one. The disadvantages are there, you do not get social security, and you can get exploited by your employer – and your employer exploiting you may even be another Palestinian refugee.

Doing away with the work permit requirement for the refugees will ease things and will probably not increase the Palestinian work-force by much. They are already here and they are already working they will just be happier and working legally. Many advocates insist on saying that Palestinians cannot work in 72 jobs and if you say no its 71.5 then you are treated worse than a holocaust denier.

The truth it that we do not really know the exact number of jobs they cannot legally do even if they wanted to. The Ministry of Labour lawyers identified 14 jobs that all foreigners are banned from if they do not belong to a country that has reciprocity agreements with Lebanon. A study of the various laws and agreements may reveal one or two more. But in the end what difference does it make? Palestinians have no incentives to apply for a work permit and you can neither force them nor stop them. Changing the law in a way adjust the texts to reality on the ground.

Advocates of Palestinian rights in Lebanon do a lot of harm by exaggerating the situation. Some of them are probably also still fighting the Lebanese civil war or the civil rights movement in the US.

Property law is the worst; I do not see how the discrimination can be justified. It was only passed in 2001 and its application is even worse than the law itself. However, the amendment to the law that discriminates against the Palestinians will cancel itself out once a Palestinian state is recognized and since Lebanon accepts this through its affiliation to the Arab Peace Initiative then it is Lebanese policy to recognize the state. The impact of changing the property law to allow Palestinians the same quota as other non Lebanese citizens will initially mean that all those who own property already will be legalised. This is a complex issue and I am not sure about its impact. One thing is sure, the Lebanese state will never take away any Palestinian property in Lebanon on the grounds that it is illegally owned.

The big unknown is the issue of Social Security. Again numbers are not as frightening as it is assumed but we need to do a proper impact analysis on this to reassure those who are claiming that it will cost billions. Only Palestinians who are regularly employed and make social security contributions will benefit from it. Again the figures being thrown around are very inflated and alarmist. The entire Palestinian population in Lebanon is around 250,000 at most. Of these a maximum of 40-50, 000 are active and according to some studies up to 70 percent of them are in entrepreneurial businesses i.e are not employed in a job that would require social security registration.

QN: Any other thoughts?

Tayyib, one last thought if only to repeat the importance of not linking any solution to rights with any thinking about security.

« Watch Your Mouth
How To Prevent the Next Israel-Lebanon War: A Conversation with Nicholas Noe »