People of the Book 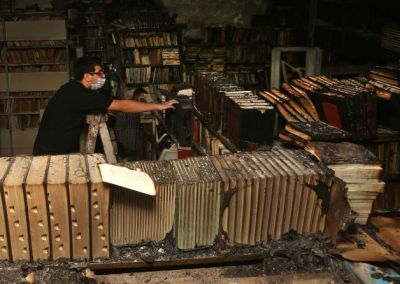 I’ve written something for The New Yorker’s literary blog about the fire at the Sa’eh Bookshop in Tripoli. The first paragraph is below, followed by a jump to the site.

If you’d like to donate books to the library, check out the book drive’s Facebook page. Would prefer to make a cash donation? Here’s the relevant page.

Letter from Lebanon: A Bookshop Burns

On a Friday night shortly after New Year’s, a group of men broke into an antiquarian bookshop in the northern Lebanese city of Tripoli and set it on fire. The shop belonged to Father Ibrahim Sarrouj, a Greek Orthodox priest. A longtime resident of Tripoli’s old Serail neighborhood, he had amassed a large collection of books—rare first editions of scholarly texts, novels in different languages, dictionaries, encyclopedias, out-of-print magazines—in the forty-plus years since he opened for business. The fire burned for under an hour before it was discovered, but an untold number of books were destroyed.

Tripoli is a mess. Just a few miles from the Syrian border and comprising a religiously mixed population, it’s become one of the most dangerous places in Lebanon. Sunnis and Alawites—variously at odds since the Lebanese civil war and now feeling the stakes of their feud deepened by the existential conflict next door—lob mortars and rocket-propelled grenades at each other’s neighborhoods while car bombs explode outside congregational mosques. A preponderance of religious and political powerbrokers in the city has made it difficult for the Lebanese Army to establish order. Radical Islamists—previously a kooky fringe in Lebanese politics—attract more support each day from Tripolitans incensed by Hezbollah’s involvement on the side of the Assad regime in the Syrian civil war, which has brought over a million refugees into Lebanon. Meanwhile, the princes of the alleyways (as neighborhood strongmen are sometimes called) vie for influence with the city’s other grandees, including two Sunni billionaire politicians and a former security czar. (keep reading)