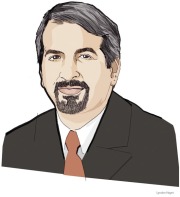 Anthony Shadid, a Middle East correspondent for The New York Times passed away today in Eastern Syria, having suffered a fatal asthma attack. Like millions of other readers, I’d been a longtime admirer of Anthony’s superb coverage of the Middle East as a reporter for the Times and the Washington Post.

He was one of the most curious, kindhearted, thoughtful, and intelligent journalists I’d ever met, a mentor to countless foreign correspondents, and someone who set a new standard for informed, balanced, and nuanced storytelling that somehow managed to find the momentous in the mundane.

I feel privileged to have known him personally, and I will mourn his loss.

« Sectarianism in the Eye of the Beholder: Shehadi Responds to Landis
Whodunit? Politician to be Named in Hariri Murder Indictment »

9 thoughts on “A Terrible Loss”