Some Background Reading on U.S. Military Assistance to Lebanon 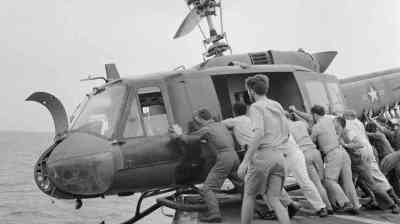 This one’s busted. Maybe the Lebanese could use it?

News outlets are reporting that the U.S. government has approved a startling increase of military aid to Lebanon, increasing the size of the country’s potent assault helicopter force by an unprecedented 25%.

“Six Huey 2 helicopters have been delivered to Lebanon as part of bilateral military assistance,” [a diplomatic source] said on condition of anonymity.

The air force has 24 U.S. Huey helicopters and 11 French-made Gazelles, both of which can be equipped with guns and missiles.

Another diplomatic source informed Qifa Nabki that “the Huey-2 helicopter is a devastating weapon that sends good-for-nothings scurrying wherever it is deployed.”

As if this magnanimous sharing of sensitive military technology were not enough, the U.S. Embassy also confirmed that “last week, the U.S. gave a $29.8 million, 42-meter coastal security craft to the Lebanese Navy to patrol and protect Lebanon’s sea border.”

For background on the U.S.-Lebanese military relationship, here are some useful backgrounders from the Qifa Nabki archives (circa 2010):

U.S. Military Assistance and the LAF

The Inside Scoop on U.S. Military Aid to the LAF

« A Questionable Strategy
Could the Orthodox Law Be a Boon for Lebanon’s Liberals? »

72 thoughts on “Some Background Reading on U.S. Military Assistance to Lebanon”