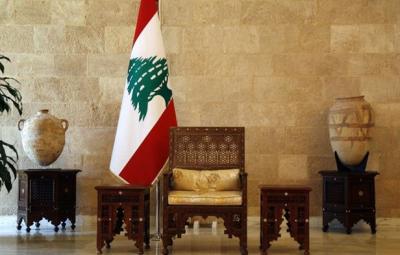 Lebanon failed to elect a president this week, but the failure was rather dignified by recent standards. Unlike the 2008 election — preceded by twenty months of government paralysis, public demonstrations, a parliament building locked by its Speaker, and several high-profile assassinations —  it was a relief to watch 124 parliamentarians show up at the Chamber of Deputies last Wednesday and cast their votes.

Most commentary over the past couple of weeks has centered on the maneuverings of the likely candidates. Would Saad Hariri cut a deal with Michel Aoun? Has Samir Geagea successfully transformed himself from a convicted war criminal to a respectable presidential contender? Is there a ghost candidate waiting in the wings? One can dream…

I have to admit that I’ve found these discussions unsatisfying. More relevant than the matter of who the next president will be is the question of whether Lebanon needs a president at all, a quarter century after the Ta’if Agreement.

Consider the President’s powers and duties (articles 49-63 of the Lebanese Constitution). Apart from serving as “the symbol of the nation’s unity” and safeguarding “the constitution and Lebanon’s independence, unity, and territorial integrity,” the President of the Republic does very little without the say-so of the Council of Ministers. He or she accredits ambassadors and promulgates laws, but doesn’t have a vote in cabinet, cannot select a Prime Minister without binding consultations with the Parliament, cannot dissolve Parliament without permission of the Council of Ministers, and cannot effectively block a law from being passed.

Before Ta’if, the Presidency was far more powerful than it is today, at the expense of both the Chamber of Deputies and the Prime Minister’s office. If there is one thing that unites Lebanon’s Christian parties, it is their revanchist attitude toward Ta’if and their demand that the President’s powers be restored. This seems very unlikely today, but I agree that some drastic reform of the position needs to be considered.

The presidential election process in Lebanon (courtesy of IFES). Click to enlarge.

One problem is the way in which presidents are elected, which — like the process by which cabinets are put together — is far too vulnerable to spoilers masquerading as political consensualists. This is partly the fault of the constitutional language describing the process. In the first round of voting, a candidate needs an extraordinary majority (two-thirds, or 86 votes) to be elected. In subsequent rounds, an ordinary majority (51%, or 65 MPs) is sufficient. What happens, though, if no political bloc commands a majority in Parliament, as is often the case? And what if one bloc declines to participate in the session, denying a quorum? The Constitution provides no answer to these questions, and as we saw in 2007-08, this can be a problem. As a wise friend recently put it to me: “A constitutional vacuum is one thing; a vacuous constitution is another.”

On the other hand, it’s short-sighted to approach the question of presidential powers from an exclusively constitutional basis. The Speaker of Parliament’s powers are very limited as far as the Lebanese Constitution is concerned, and yet Nabih Berri has wielded them to great effect. Conversely, we’ve seen the powers of the Prime Minister (who is, textually speaking, primus inter pares) effectively eroded since 2005 with the introduction of the blocking third in the Council of Ministers and the ever-lengthening cabinet formation period.

From this perspective, President Michel Sleiman has similarly been able to do more with his limited powers than the Constitution suggests. Ziad Baroud’s nomination as Interior Minister in 2008 was apparently a Sleiman demand, and the work on a new electoral law for 2013 was carried out by another of his appointees, Marwan Charbel. However, whenever the Commander-in-Chief made the mistake of expressing his opinion on military matters, he was quickly put in his place.

Twenty-five years after Ta’if inaugurated Lebanon’s Second Republic and nearly nine years after the Syrian departure gave us a new, mysterious set of protocols (what I like to think of as Lebanon 2.5), it is time to rethink the country’s principal institutions and symbols. The President today is responsible for safeguarding a Constitution that is consistently ignored, convening a national dialogue process that is ineffectual, and leading a Christian community that no longer thinks of itself as a single political unit. In this context, why should the identity of the President matter?

In other news, I’m happy to report that I’ve just wrapped up my teaching for the year, and I should have more time to devote to blogging again. Please forgive the long hiatus.

226 thoughts on “The Lebanese Presidency, Twenty-Five Years after Ta’if”