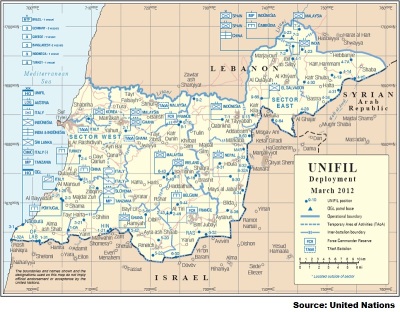 This is an open thread for comments, press reactions, and analyses to Hizbullah’s attack on an Israeli convoy in the Shebaa Farms earlier today. I will add relevant clippings and analyses from the comment section throughout the day.

A swift response from Hizbullah to last week’s attack was expected, given that several of their fighters, a commander, and an Iranian general were killed. But many believed that the response would come in the Golan or outside the region altogether (if at all). An in-kind retaliation from within Lebanese/Syrian territory sends the signal that the party is ready for a fight if provoked. But is the rest of Lebanon? The situation in the country is as polarized as it was on the eve of the July War in 2006. If Israel reacts as it did in 2006 (or in Gaza last year), the Lebanese government and army may lose the fragile hold they have over security, and Lebanon will have a second refugee crisis to contend with.

Via Reuters — “Prime Minister Benjamin Netanyahu, who has made security his top priority in a campaign for re-election on March 17, said: that “whoever is trying to challenge us on the northern frontier” should bear in mind Israel’s Gaza offensive last year. Speaking in Sderot, an Israeli town bordering the Gaza Strip, Netanyahu said Israel was “prepared to act powerfully on all fronts,” adding: “Security comes before everything else.”

“These critical few hours ahead of a major decision by Israel on whether to enter into (another) devastating conflict” (Nick Noe, Mideastwire)

Qusu — The expression ‘nip it in the bud’ comes to mind. If Hezbollah played the game of absorbing blows, that would embolden the Israelis and, with each subsequent attack, the cumulatively necessary response would become so harsh as to necessarily provoke a full scale war. In a way, the Israelis faced this problem in 2006. Having absorbed many Hezbollah skirmish type attacks, when they finally did respond in 2006, they really hand choice but to respond in a disproportionate manner.

Certainly the situation now opens the way for Israel to start a war, but it leaves them the option of a tit-for-tat retaliation too. The calculation of Hezbollah must be that in case the response is tit for tat it will make the Israelis think more carefully before attacking them in Syria in which case a worthwhile goal has been accomplished whereas if all out war is the result, then perhaps they view now a relatively propitious time to engage in it given that:

1) Israel has elections in 45 days and there is no way the war would end in time.
2) US/Israel relations are at an all time low and so US support would be minimal.
3) Hezballah and the LAF are fighting in a de facto alliance with the US and EU against ISIS and there is no appetite to weaken this effort from any Israel-supporter country.
4) The Syrian border is a vaguely controlled area from which countries like Iran could fight with no risk to themselves.

Probably a well through through tactical strike by Hezbollah.

Of course, no one can control events in these times and places so anything is possible as the HA press release clearly states.

Jim Reilly — My guess is that Israel’s recent strike in the Golan was an opportunistic decision made because some high profile targets had (foolishly? or because of treachery?) become vulnerable. Perhaps, according to Israeli thinking, HA’s Syrian and Biqa’ Valley preoccupations would make a significant HA response unlikely. And if Iran were to step up its bellicosity in the wake of Israel’s killing of an Iranian general, well, this would likely cloud the atmosphere for the difficult nuclear talks that Netanyahu would like to scupper anyway.

So now, HA attacks an Israeli patrol in Shebaa Farms and HA may be thinking, here is our response; what are you going to do about it, Netanyahu? If Israel’s response is limited, then HA has made its point, has brushed up its tarnished Resistance bona fides, and briefly distracts Lebanese and Arab public opinion from HA’s Syrian entanglement.

If Israel’s response is more dramatic (= larger scale), then all political bets are off, given the political complications of the current situation. I don’t think anyone can really calculate what the various outcomes and spin-offs would be, given the tangled web of regional and international interests that now are at play. For the sake of Lebanon and Lebanese, let’s hope these scenarios remain unexplored.

AIG — If I were Bibi I would retaliate in the Syrian part of the Golan hitting the Syrian army and any affiliates very strongly.

This has several advantages:
1) It hits Iran and Hezbollah were it hurts the most strategically for them. The last thing they want is to make Assad’s position in Syria even more precarious. That is why they did not retaliate from the Golan.
2) It will show the Lebanese public that Israel is willing to give Hezbollah a chance not to bring Lebanon into the war. If Hezbollah retaliates again from Lebanon, that would be another story but the Lebanese will know Israel made an effort.

Hezbollah will again be faced with three bad options:
1) Not retaliate
2) Retaliate from the Golan and hurt Assad
3) Retaliate from Lebanon a second time and lose more Lebanese public support

« A Puzzling Escalation in the Golan
Fearful Symmetry »