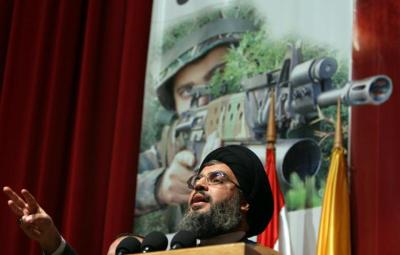 Below is a translated excerpt from the most recent speech by Hezbollah Secretary-General Sayyid Hassan Nasrallah. His discussion of the timing and planning of Hezbollah’s retaliation for Israel’s attack in Quneitra a couple weeks ago was absorbed, characteristically, with the question of symbolism. Nasrallah’s postmortem glosses on his party’s operations often assume this pose of the charismatic schoolmaster, drawing the attention of his students to the whorls of significance and shrouded meaning underlying the work they are reading.

The trope of symmetry, in particular, stood out in this speech. Nasrallah has been keen to suggest that this operation was not simply about saving face or warning Israel against further provocations. Rather, the message (directed at enemy and friend alike) was a reminder that the party was still capable of carrying out precision strikes in its old killing fields, and that it had not neglected its southern flank since turning northward to fight in Syria. Any pop-up jihadi group (your AQAPs, your Jabhat al-Nusras) can plant a bomb by the road in the Golan, he seemed to suggest. Only Hezbollah can choose the exact time and place of its confrontations with Israel.

Have a look and listen; the excerpt translated below starts around minute 56:00.

Nasrallah: “The operation took place under the conditions of maximum Israeli military mobilization and preparedness. This is one of the distinguishing characteristics of the operation, and it has been widely recognized; I’m not saying anything new. They were under the highest level of mobilization, because they knew in advance of Thursday that an operation was being planned.

“From about Sunday, the Israelis saw a number of different steps taken across the country by the Resistance. They spy on us, they listen to us, and at the end of the day, our communication is not all over fiber optic cable. There are also cell phones, and people talk, and many individuals are involved, and there are many steps to take… So, they understood that something was happening.

“Therefore, by Sunday night or Monday, they had set the highest level of mobilization: intelligence, strategy, informants, spies, borders, precautions, front lines, everything. They were practically counting every ant on the border, and had taken every possible location into account.

“Nonetheless, the Resistance launched this special operation in the Shebaa Farms in the light of day, and under these conditions of maximum Israeli mobilization. And here, let me address the enemy and his people, who believe that their army is so powerful. Even under maximum mobilization, and in a territory where they have military positions and drones in the sky and complete domination in terms of intelligence and strategy, the Israeli army was unable to comprehend what was happening from the beginning of the operation until the end of it. Only once our boys had returned from the field did the Israelis finally wake up.

“What was the result of the operation? First of all, they killed us in the light of day, and so we killed them in the light of day. Their operation was at half past eleven, or a quarter to twelve… Our operation was at half past eleven, give or take five minutes. Two cars destroyed in exchange for two cars, and a grain of musk. Casualties in exchange for martyrs; as for the mismatch in numbers, we’ll sort that out in the future. Rockets in exchange for rockets. We didn’t go bury a bomb… No, in the broad light of day, the boys went into the field with rockets on their shoulders, and executed the operation.

“But there are two differences between us and Israel. First of all, because they are cowards and not men, and because “they will not fight against you … except in fortified cities, or from behind walls” (Qur’an 59:14), they stabbed us in the back. Whereas the men of the Resistance, because they are men and are not afraid of death, they came at them from the front, face to face.