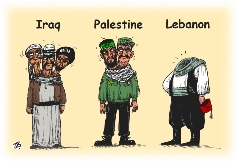 The fortnightly Middle East International has just been re-launched, under the stewardship of some very able editors and advisors. Some of you may recall the highly-regarded magazine during its first run from the early 1970’s up until 2005. Well, it’s back, and I have to say that it looks very good.

The first issue is available for free download on the website. Beginning next week, you’ll have to pay for a subscription. I wager that it will be well worth it, judging from the quality of the contributions. (There are pieces by several very smart journalists and analysts, including Jim Muir, Omayma Abdel-Latif, Graham Usher, Nick Blanford, Abigail Fielding-Smith, and others.)

Back to the cabinet issue…

There is still no news on the Kata’eb’s decision to resign from the cabinet; it looks like they’re weighing their options.

Otherwise, check out a list of all the new ministers’ CVs (in Arabic), courtesy of the good folks in the Orange Room.