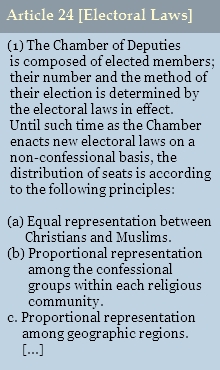 As most of us know, the ratio of voters to members of parliament varies across Lebanon’s electoral districts. This is a necessary byproduct of the need to square the mandatory confessional balance in Parliament with demographic realities on the ground. Article 24 of the Lebanese Constitution states that until such a time as a non-confessional electoral law is adopted, the distribution of seats in Parliament must give equal representation to Christians and Muslims. Obviously, in order to achieve this, you either have to give certain districts greater representation than others, or you have to let certain districts elect representatives who are not from the same sect as the majority of their constituents.

This latter condition prevailed in the 2000 electoral law, where districts had a more uniform ratio of voters to representatives than the current law, but many Christians  complained that the majority of Christian MPs were being elected on the lists of non-Christian heavyweights like Rafiq al-Hariri, Walid Jumblatt, Nabih Berri, etc.

The question that I’d like to raise in this discussion is the following: What would happen to Lebanon’s electoral landscape in the context of a non-confessional electoral law AND a district map that was based on equal suffrage (i.e. the principle that every citizen’s vote should have the same value)?

In my opinion, simply advocating the abolishment of confessional quotas doesn’t quite go far enough in producing a fairer system because a non-confessional Parliament based on the current geographical distribution of seats would still under-represent certain regions and over-represent others. Think about it: if someone living in Bint Jbeil feels that the current system discriminates against them because their vote counts less than the vote of someone living in the Shouf, how would their situation change if the confessional quotas in parliament were dropped BUT the same districts still elected the same number of MPs? The resident of Bint Jbeil’s vote would still count less than the resident of the Shouf.

So, how does one go about producing a new distribution of seats? I propose the following simple exercise, which is mostly just a thought experiment to get a conversation going (or to put you all to sleep, whichever comes first.)

How does this ideal average ratio match up with the current electoral law? (Note that I’m not interested whatsoever in the issue of which sects get more or less than their fair share; I’m interested purely in which districts are over/under-represented). Click the table below to enlarge it.

All I’ve done here is to divide the number of registered voters in each district by the ideal average ratio (25,404) in order to come up with the “correct” number of parliamentary seats for each district, under our system. On the right hand side (highlighted in blue), you can see the new list of parliamentary seats arranged by district, as well as the difference between the old system and the new one. Here’s a summary of the results:

2. Eight districts have a ratio that over-represents them by one seat each: Koura, Kisrawan, Metn, Shouf, Zahleh, West Bekaa, Beirut 1, and Jezzine.

3. Six districts have a ratio that that under-represents them by a range of 1-2 seats: Akkar, Miniyeh-Dinniyeh, Zahrany, Nabatieh, Tyre, and Bint Jbeil.

So far, this should not be very surprising. But wait, there’s more! The next question that I would like to ask is: what would have been the result of the last election had we had a system like this one in place, rather than the existing law?

Obviously, this is very speculative, but it is not an entirely unreasonable exercise given that during the last election, every district (with the exception of the Metn) was swept by either the loyalist or opposition list. In other words, a majority voters in every district elected the whole slate of candidates presented to them, “zayy/mitl ma hiyyeh” (and in the case of Aley and Beirut 2, the mixed results were pre-arranged by the opposing sides ahead of time).

This fact makes it easier for us to simply adjust the geographical distribution of seats to conform to the ideal average ratio described above, and then model the outcome of a hypothetical election using the 2009 returns. So, for example, we are assuming that if Nabatiyyeh had five seats rather than three in the last election, Hizbullah would almost certainly have won all five (because people voted overwhelmingly for their entire list), and if Kisrawan had four seats rather than five, the FPM would have won 4 instead of the 5 they won in 2009.

Ok, so if we adjust the number of seats across all of these districts to conform to the ideal average ratio, and if we assume that the same parties/coalitions swept the same districts that they swept in 2009, the final result would seem to be that March 14 would have won 69 seats and March 8 would have won 61 (for a total of 130 seats; the readjustment of seats required an addition of two seats for the rounding-up math to work out). The new margin of victory is 53%-47%, rather than 55%-45% (as it was in 2009, when M14 won 71 seats and M8 won 57).

So, obviously, the election would have been closer, but not by much. The March 14 coalition (such as it is) would still have won, a fact which surprised me, given what we know about the discrepancy between the popular vote and the actual results. Hizbullah and Amal would have benefited substantially to the tune of 7 extra seats because of the new math, but the March 8 Christians (Aoun and Frangieh, etc.) would have lost 3 seats (in Kisrawan, Metn, and Jezzine). Meanwhile, the Future Movement would have gained 3 seats in Akkar and Miniyeh-Diniyyeh, but various March 14 parties would have lost 5 seats in Koura, Shouf, Zahleh, West Bekaa, and Beirut 1.

It seems to me that the takeaway conclusion from all of this is that: (a) current voter/representative ratios are not that out of whack with the ideal ratio; (b) even if we were to adjust the ratio (which I think we must do), it would not fundamentally change the basic landscape of Lebanese politics, which requires a lot of coalition building and inter-party (and, by extension, inter-sect) cooperation.

What would seem to me to have a much stronger effect on political dynamics would be the adoption of proportional representation. If I have some time (or some help!) I will try to run the above simulation using a PR model, just for fun. (Yes, I know how lame that sounds, thank you very much, but you all should know me by now…)

Those of you who are still awake should feel free to pillory and critique!

21 thoughts on “Electoral Districts in Lebanon”