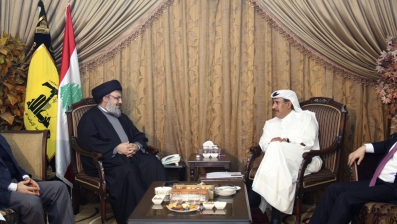 It’s been another marathon day for political deal-making in Lebanon. As recently as this morning, the Syrian-Saudi initiative remained dead and buried, only to be resurrected under Qatari-Turkish stewardship (and French oversight) by the afternoon.  Tomorrow, we may see the Brazilians and the Russians tossing their hats in the ring, and before you know it, the Tasmanians will be elbowing their way to the bar as well.

Lebanon’s speaker of parliament Nabih Berri was quoted in a story in An-Nahar today confirming the terms of the Syrian-Saudi initiative, which were first discussed by Hizbullah Secretary-General Sayyid Hasan Nasrallah in his speech on Sunday evening. These terms, as you will recall, were based upon the following three demands by the opposition:

According to Berri, there was a last-ditch effort on Sunday to reach an agreement with Saad al-Hariri on this deal (before the UN Prosecutor Daniel Bellemare could file his indictment to the pre-trial judge on Monday), but it fell through. Had Hariri accepted, he would have presumably been re-nominated prime minister by the opposition. Instead, he turned it down, which led to a flurry of diplomatic activity meant to prevent the security situation in Lebanon from spinning out of control.

The Daily Star is reporting that the Turks and Qataris have stepped in where the Syrians and Saudis failed, and are apparently close to hammering out an agreement which is based on the earlier initiative. While we wait to hear how this pans out, I thought it would be worth reflecting on the opposition’s demands, and what they tell us about how Hizbullah and Hariri view the consequences of the Tribunal.

First of all, as Nasrallah himself noted in his speech, even if Hariri were to accept the three-point plan, this would not bring an end to the STL’s proceedings. This morning, I interviewed the STL Registrar, Herman von Hebel, and he had this to say about the issue of financing:

I’m very confident that we will be able to get the financial support for the budget. Lebanon continues to be obliged to cooperate with the Tribunal and provide financial support – regardless of the state of the government. There remains strong support for the Tribunal in the international community: 20-25 countries around the world are supporting us financially. Following the issuance of the indictment, we have only seen increased attention and support. So, I am confident that even if Lebanon’s share (49% of the budget) were not provided, we would be able to continue our work with contributions from other states.

Similarly, I imagine that withdrawing the Lebanese judges would not represent an insurmountable obstacle for the STL, nor would the annulment of the agreement between the STL and the Lebanese government be anything more than a symbolic move, since the agreement was never ratified by Parliament anyway (it was imposed by Chapter VII).

So, if these three steps make no practical difference to the functioning of the STL, why are they so important to Hizbullah? No one in Lebanon would believe that Hariri and March 14th had changed their true position on the STL even if they did agree to “distance” themselves from it using these measures. So why insist on the charade? On the other hand, because the indicted individuals will almost certainly have to be tried in absentia (since the Lebanese Army can’t be trusted to break up a street fight in Zoqaq al-Blat, let alone arrest a member of Hizbullah and put him on a plane to The Hague), does it really matter, practically speaking, what the Lebanese government’s official stance is on the STL? And if not, why didn’t Hariri accept the proposed settlement?

The obvious answer to these questions is that Hizbullah is seeking to put another dent in the STL’s public image, so as to mitigate any anticipated tarnishing of its own image. I say that this is the “obvious” answer only because it’s the one that people typically offer whenever talk of the Tribunal’s consequences comes up. But the truth is that no one really knows how (or if) the trial will impact Hizbullah’s image once the trial begins. In my opinion, that will depend entirely on the kind of evidence that is marshalled, and not on any transparent political games being played in Beirut.

More on this tomorrow…

« Some Post-Speech Thoughts
Who Will Be Lebanon’s Next Prime Minister: Doing the Parliamentary Math »