On Syria, What Separates Assir From Hizbullah & Hariri? 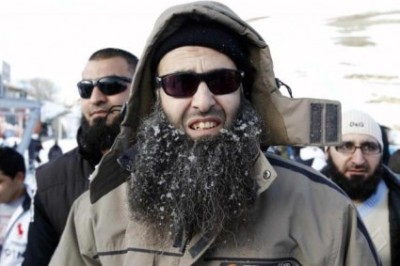 Apparently, all that separates a salafist from a hipster is a pair of sunglasses and a hoodie.

Everyone is wringing their hands over Lebanese Salafist leader Shaykh Ahmad al-Assir’s call to send jihadists to help Syria’s rebels. On Monday, he announced the formation of resistance battalions that were prepared to join the side of the uprising, saying: “There is a religious duty on every Muslim who is able to do so… to enter into Syria in order to defend its people, its mosques and religious shrines, especially in Qusayr and Homs.”

The Lebanese President has rejected al-Assir’s demands, along with Walid Jumblatt and the Future Movement.

Apparently, even the Free Syrian Army isn’t interested in his offer, stating: “Our official position as the Supreme Military Command of the Free Syrian Army… is that we thank them but we reject any calls for jihad in Syria…We reject any presence of foreign fighters, regardless of where they are from. We have said that what we are missing in Syria is weapons, not men.”

My friend Mustapha over at Beirut Spring, on the other hand, is begging the salafists to “please, please, please go die in Syria…”

Let us once and for all get rid of your idiotic backwardness and medieval worldview. The sooner you die, the better. It’s a win win situation: You get your virgins in the sky, and we get to live without people who are fighting a pointless religious war that is thousands of years old.

I agree that the idea of jihadists going into Syria from Lebanon is an unsettling notion. But who are we kidding, really? Does anyone believe that there aren’t already Lebanese fighting in Syria, on both sides of the conflict? It has been established by many respected observers and reporters that both the Future Movement and Hizbullah are involved in the conflict in direct and indirect ways.

A few months ago, someone caught `Uqab Saqr on tape coordinating what appeared to be weapons transfers, effectively confirming what everyone knew already, namely that Saad Hariri is a major player in the logistical supply chain of weapons to the FSA. And the press of late has been full of reports about Hizbullah’s direct involvement in the fighting in Syria.

What is the difference between Ahmad al-Assir sending a few dozen Lebanese jihadists to die in Syria and Hariri or Hizbullah playing the roles they are playing? Are they not equally as destabilizing to Lebanon?

I’m knocking on every piece of wood in my office as I type this, but I’m a little amazed that we haven’t seen more significant spillover of violence into Lebanon already, because of the extensive involvement of its parties in Syria.

32 thoughts on “On Syria, What Separates Assir From Hizbullah & Hariri?”