Pathos and Promises: Nasrallah on the Dahiyah Blast 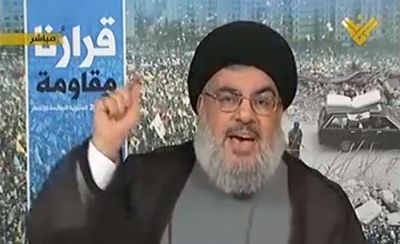 Nasrallah called on the Lebanese to work together to uncover the networks of terrorists plotting more attacks in the country because, as he said: “These groups have killed even more Sunnis than Shi`a, even more Muslims than Christians. They send bombs into mosques just as they send them into churches… So anyone who thinks that they will only target the Shi`a is deluded.”

He described the takfiri groups fighting in Syria as murderous barbarians and indiscriminate killers motivated only by sectarian rage, unlike Hizbullah’s men who fight “according to values and principles,” never targeting civilians or killing prisoners of war. Addressing his opponents in the pathos-filled finale, he promised to double the number of Hizbullah fighters in Syria should Lebanon be attacked again:

I can appreciate the importance of keeping a stiff upper lip in the face of increasingly brazen attacks, but one wonders whether Nasrallah’s double-down strategy is only going to end up costing more lives. Who is his threat meant to frighten and deter? Surely it will only embolden these groups to launch more cowardly attacks against civilians so as to lure Hizbullah’s fighters into Syria, where they can be fought on the lawless steppe.

Hizbullah’s fighting machine was developed over the past three decades with the single goal of facing Israel’s army and intelligence services. It overcame Israel’s qualitative military edge by waging effective asymmetric and psychological warfare, and preying on the fears of the Israeli public. Today it faces a foe that is adopting the same strategies, and yet Hizbullah appears poised to make the same mistakes that Israel once did, underestimating its enemy and trying to cow them with hubristic threats and military surges.

As Nasrallah correctly affirmed: we, the Lebanese, are all in this together. If Lebanon is sucked into the Syrian maelstrom, it will be our civil peace that is shattered, our tenuous balance that is disrupted. And yet the ironic truth is that the most eloquent prophet of the impending sectarian apocalypse is, simultaneously, inviting its horsemen in with promises of fresh fodder and ample bedding.

94 thoughts on “Pathos and Promises: Nasrallah on the Dahiyah Blast”