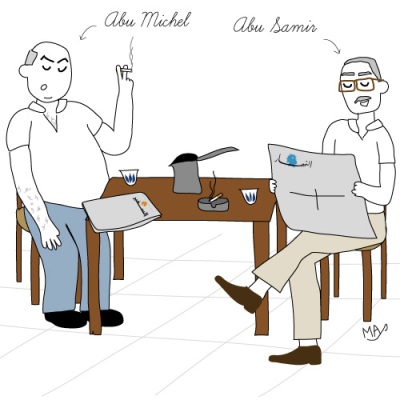 Whenever a bomb explodes in Lebanon, conversations both public and private revolve around an old parlor game that we might call: “Motives & Mysteries”. For those unfamiliar with the genre, here’s a snippet:

Abu Michel: A bunch of jihadi dogs and salafist mercenaries. I hope the Resistance hunts each of them down and strings them up.

Abu Samir:  My dear fellow, do you realize that the bombs targeted Sunni mosques?

Abu Samir: So, it obviously wasn’t the work of salafists. Why would they kill other Sunnis? It had to be Hizbullah.

Abu Samir: Payback for the Dahiyeh explosion. Sending a signal to al-Assir’s boys and the other militant Sunni factions that they won’t be pushed around.

Abu Michel: That’s ludicrous. Hizbullah has no motivation to inflame sectarian tensions. The Tripoli operation was obviously carried out by someone who had an interest in emboldening Sunnis to take revenge against Hizbullah.

Abu Samir: That’s what Hizbullah wants you to think. They struck back at the salafists, knowing full well that no one could imagine they could be so stupid as to blow up a Sunni mosque.

Abu Michel: Too clever by half, my dear friend. It was actually the jihadi groups who planted the bombs, knowing that no one would accuse them of killing other Sunnis.

Abu Samir: Hizbullah is fighting in Syria in the broad light of day, alongside a regime that is gassing hundreds of innocent civilians. Do you think they are worried about offending Sunni sensibilities? The Tripoli bomb was the work of a thuggish militia that doesn’t mince words.

Abu Michel: Thuggish militia? Hizbullah’s a ladies book club compared to the savages crossing the border from Syria. These guys decapitate their enemies, eat their organs, and post the photos on Instagram. They take selfies with severed heads. Saudi Arabia is paying Al-Qaida to blow up Sunni mosques in Lebanon so as to cause a Sunni-Shiite war that will bog Hizbullah down, thereby making it easier to defeat Bashar al-Assad in Syria.

Abu Samir: Nice try. But let me enlighten you. The Tripoli bomb was obviously an Iranian-Syrian plot carried out by Hizbullah in order to make mainstream Sunnis fear a descent into a sectarian civil war, leading them to give up their opposition to Hizbullah’s weapons and relinquish their support for the Syrian revolution by painting their enemies as foreign mercenaries and radicals.

Abu Michel: I see you’ve been thoroughly indoctrinated by the American-Zionist-Wahhabi axis.

Abu Samir: Not nearly as brainwashed as you are by the Russian-Iranian-Shabbiha axis…

You get the idea.

Once upon a time, I engaged in such conversational helices in the hope that they would lead to some kind of convergence. On rare occasions they do, but typically not. Over the years, I’ve devised a simple rule to gauge whether or not it’s worth engaging.

The rule is this. Ask your interlocutor what they would say if the awful truth were conclusively established, and their heroes were implicated in the grotesque crime under debate. For example, if it were unequivocally confirmed that Bashar al-Assad gassed 1300 civilians, what would Abu Michel have to say? What if it came to light that Ahmad al-Assir organized the car bomb on the Tripoli mosques? How would Abu Samir’s outlook change in that case?

If such a revelation only leads your discussion partner to start another round of Motives & Mysteries (“there had to have been a good reason for it… it was unfortunate but necessary … casualties are unavoidable in a war against imperialism …”), then smile politely and just move along.