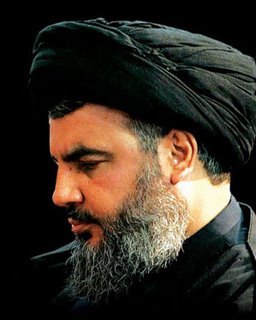 In a speech commemorating the one-year anniversary of Imad Mughniyeh’s death, Hizbullah secretary-general Sayyed Hasan Nasrallah lingered briefly on the subject of Rafiq al-Hariri’s assassination, saying that it was an event that the entire nation mourned. Striking a tone both solemn and conciliatory, Nasrallah paid homage to the idols of his political opponents by way of seeking a response in kind for Hizbullah’s fallen heroes. Similarly, he conveyed the condolences of his party to the family of Lutfi Zeineddine, the PSP partisan killed by hoodlums on the way home from the March 14 rally on Saturday, while reminding the nation that this was one crime in a string of tragic incidents to befall Lebanese families on both sides of the political divide.

Listening to Nasrallah, one often feels caught in the spell of an enthralling performer, an eminently frank, reasonable, and straight-talking figure who is – by Lebanese politicians’ standards – refreshingly free of BS. Whatever one thinks of Hizbullah’s political and theological orientations, it is easy to see why Nasrallah has developed a large following outside his party, due to his masterful skills of communication and uncanny political instincts. He is the Bill Clinton of the Shiite Crescent, the Winston Churchill of the Islamic Resistance. He could teach brain surgery to 12 year-olds, such is the clarity and lucidity with which he conveys complicated ideas and cuts through touchy terrain.

One of the most interesting parts of the speech, from my perspective, came toward the end, when Nasrallah discussed the upcoming elections. He said (and I paraphrase): Lebanon is not Switzerland. We are not a nation of political parties. We are a nation of sects, and even those parties established on the basis of a political identity are de facto sectarian parties because their constituents come primarily from one sect (i.e. like the PSP and the FPM). Perhaps, one day, Lebanon will have evolved to the point where its parties are purely political; in that scenario, it would be possible for a party or coalition to rule in a dominant manner after winning an election in a decisive fashion. However, we are not at that stage yet, and therefore, a ruling coalition must govern through a process of consensus, respecting the concerns of its opposition.

He continued: This is why we are telling you from now, that should our coalition win a majority in the upcoming elections, we will be prepared to form a national unity government with the other side, granting them a blocking veto. We do this in the spirit of consensus, and in the spirit of confronting together the many economic, political, and security-related challenges that face our nation.

Nasrallah then threw down the gauntlet, saying: If the other side rejects our offer and chooses to boycott the new government, our coalition will not hesitate to rule on its own (while respecting the interests of the nation.) In making this point, Nasrallah was sending a very clear message to those on the March 14th side who had been publicly contemplating boycotting the government in the event of a March 8th win. In all cases, Nasrallah mused, Hizbullah is not even that interested in getting involved in the cabinet, and would be happy if its allies in the opposition were to occupy its share of seats, leaving the Hizb to manage the resistance.

Translation? Hizbullah would like to avoid a Hamas-style coming out party at all costs, in the event of a March 8th win. They would like, more than anything else, to go back to the old arrangement: we’ll mind our business if you mind yours.

« A Nineteenth Sect, or None at All?
A MasterCard for the Financial Crisis »

11 thoughts on “Nasrallah Tips His Hand”